In October we went on a little family vacation to California. Yes, we took 15 month old twins on a plane across country!  We have traveled with the boys before... by car... where we had the freedom to stop, change diapers, get something to eat and have all our "supplies" within arms reach.
Flying = A whole different ballgame!
Being 15 months old, one would think that they don't need "that much stuff" but oh so wrong! These two kids require so much gear!! By the looks of how we packed, it appeared we were moving to CA...2 ENORMOUS suitcases, 2 car seats, a double stroller, 2 backpacks stuffed full, 2 toddlers and two child harnesses--judge if you will.. but unless you have tried to hold twins, at the same time, while all they want to do is get down, you will realize that this is not such a bad idea..
I'm pretty sure that at least one of the suitcases was well over the weight allowance, but the sweet lady at check-in let it slide..She probably knew what we were in for.. Ha!

We booked our flight to have one stop and change planes, thinking that would be the easiest, and would allow for a little time where the boys could stretch their legs. On the way to California, we took an early morning flight, like be at the airport at 4:45am kinda flight. We planned to feed the boys breakfast at the airport and hoped they would be at their best for the flight. Mornings are always easier for us/them. Everyone is usually well rested, happy and meltdowns are few and far between. Our flight to LA went... AWESOME! We watched dvds, played with toy cars, stickers,  had snacks, Hayes took a little nap, and Parker entertained the people next to us. Only a tiny bit of crying by Parker on our decent into LA. I think his ears were hurting and it was also getting close to nap time.
Once we landed in Los Angeles, we were to change planes and fly to Santa Barbara. We knew we only had a scheduled 45 minutes to change planes. We came straight off the plane, picked up the boys stroller at the gate and headed to catch the transport bus to the next terminal. While on the bus, we heard the flight attendant for our next flight asking our ETA, since they were boarding the plane and noticed we were not there yet. The driver let her know we were just a couple mins away. She radioed back saying that the gate had been closed. We had missed our flight!! Now what? I mean we were doing our absolute best to make that flight.. we hadn't stopped to change the boys' diapers, get a drink of water, or wasted any time once landing in LAX! Ugh....
We went on to our gate and I noticed that two pilots that were riding the bus to the terminal with us, walked right past us and boarded our flight!! I was stunned. Angry. Frustrated. Sad.
After being offered a later flight.... and by later, I mean, 10 hours later.... we decided the best option would be to rent a car and drive on to mom and dad's.  We asked how to go about retrieving our luggage.. Guess where it was? Yep, you guessed it.. our luggage and the boys' carseats made it on the plane to Santa Barbara without us!
Once we regrouped, we were able to rent a car, 2 carseats, and after grabbing a quick bite at In-N-Out we were finally on our way to mom and dad's.

Here's a pic of the boys at LAX.. totally wiped out! 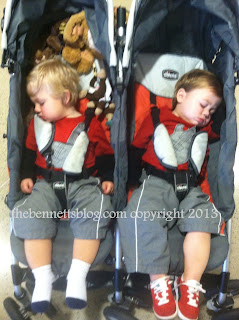 For our flight back home, I booked it around their bedtime, with the thought they would fall asleep on the plane. Well, that worked for one baby and not the other. Hayes watched a little bit of a movie and fell asleep in Daddy's arms. Parker screamed for an hour and forty-five minutes of a 2 hour flight from Denver home! In 15 months, I don't know that I had ever heard him as upset as he was on that flight. He cried, I cried. It was exhausting. We finally made it back home safe and sound and with more knowledge about air travel with twin toddlers than when we left!

Here's the top 5 things I learned:
1. No matter the amount of planning that goes into making the flight go smoothly, its unpredictable when flying with twin toddlers.
2. There is going to be crying. Either they will cry, you will cry or, in my case, BOTH. And that's ok.. Its okay to cry.
3.  Remember to pack lots of things to distract or keep your child's attention: DVDs, small toys, stickers, finger foods and drinks. There are pretty strict guidelines on what liquids you can take on the plane, so read up before packing! We took individually packaged Almond Milks and empty sippy cups to pour the milk in. TSA checked each milk package but it only took a few more minutes than normal to go thru security, and was well worth the time it took.
When handing out snacks, give them one-by-one, it keeps their attention a little longer ;)
4. When flying with two lap children, your family will probably not be allowed to sit next to each other on the plane. We were told there is only one extra oxygen mask per row, which accounts for only one lap baby per row. Just remember, if you don't have the luxury of sitting directly across the aisle from each other that you might need to pack separate diaper bags, so you aren't constantly having to pass items back and forth or around other passengers.
5.  Have patience, laugh through the rough patches, smile and wave to those who stare. (If you are parent of multiples, you are probably used to the staring by now anyway, so this probably won't bother you at all)
Oh, and there should be an award for any mom who can change a diaper in an airplane bathroom.

Even though there were a few times when I questioned if we were making the right decision about traveling such a distance with twin toddlers, I would do it all over again tomorrow! We had a fabulous trip and I hope that we never opt out of taking family trips or doing things because its more challenging with twins.