The last 6 months have been a little wild around here and I haven't blogged anywhere like I used to or as much I have wanted to. I need to carve out time each day to blog, but trying to find where that time is right now. Chasing around two busy, busy 21-month old boys, time for blogging seems to be low on the list of "to-dos" for me. Since I have realized this, it has actually made me really sad. I started this blog FOR my boys to look back at one day and see a trail of memories for them, but reality is some days I'm so busy with them making the memories, that writing about them doesn't get done... and guess what?? THAT'S OKAY or at least what I'm trying to convince myself.

So, occasionally, there will be these, "All-in-one", "Catch-up", kinda posts...   They may be a little lengthier than others, but you can stop reading whenever you want (I hope you don't, but you can)!

The last time I think I did a post on their growth/development was at 12 months (told you it had been a while): 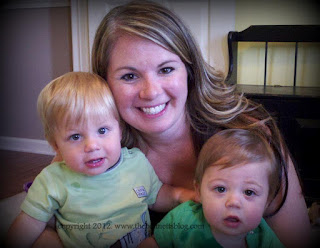 They had their last check-up at 18 months, here's their "stats" from that visit:

At 18 months, I did finally get one "pinterest project" completed that had been on my "to-do" since they were born, The Ruler Growth Chart.

Each month we stand them in front of it and check their height. 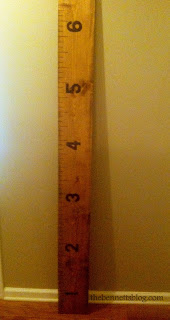 They are now 21 months and have had very little change in height or weight since their 18 month visit :)They have, however, had a HUGE change in their development. It's amazing to me to see just how much and how fast little ones grow and develop. Their awareness of the world around them has vastly changed.  Although, they will always be MY babies, they have definitely grown into the toddler phase, I might even be tempted to say, "rough & tough little boys".
Fun little facts about the each boy at 21 months:
Favorite foods:
They are NOT picky eaters, but they do have a few differences.
Parker: spaghetti, rolls, hamburgers--more of a carb kid
Hayes: spaghetti, chicken, carrots, peas--more of a protein/veggie kid
Foods they both love: Avocados, Chips & Salsa, Almond Milk, Sweet Potato Fries, Strawberries, Yogurt, Applesauce

Parker is funny, likes to laugh and have others laugh with him.  He likes to put on a show for anyone who will watch. He likes to "scare" people to get a response. It comes across as half screaming/half growling, and he will do this to anyone who looks at him. If they act scared in response, he will laugh- its a deep, contagious, belly laugh! He is content to play alone. He knows what he wants and will do anything he can to get you to understand what he wants--take you by the hand to an object, saying the word over and over until you understand--he's determined. He likes to hide and loves to close all the doors in the house.  He likes to be outside, work puzzles, play with his cars, and watch movies. His favorite store is the "ball" store, aka "Target"-- there is a big red concrete ball on the ground as you walk in to the store and he's obsessed! He LOVES Dogs, well, any animal really--he calls them all "dawgs" and he is very gentle with them. P loves music and loves to dance. He loves his "blankie" and "G" (his giraffe paci). He gives kisses, then claps because he did!  Parker has never met a stranger and thus his nickname, "Baby Mayor".

Hayes is reserved, methodical and charming. He has a smile that will melt your heart, but doesn't show it to just everyone. He is thoughtful in his actions. He likes to learn. He loves doing puzzles, especially the ones on daddy's iPad. He loves music and dancing. He loves his Monkey (pacifier). Haysie loves playing with his cars and building blocks. Playing outside, going for walks to look at the creek, playing on the playground and climbing up the slide are some of his favorite things. He loves to jump--onto, off of, from one thing to the next--he is ambitious. He is loving. He gives kisses and hugs. He babbles.. he uses inflection and purpose in his babbling, but we still have no idea what he saying--yet. He is silly. He loves to visit the bakery at the grocery for his "cook" (cookie). He loves his sleep, just like his mommy. He loves movies. He is very good when given a task and he really likes to feed the dogs. He is sensitive and caring.

Both boys are two of the sweetest little boys, EVER. They are both busy and exhausting at times, but I am so very blessed to be their mom. They make each day better than the one before.